Description The fuel cell purportedly split water into its component elements, hydrogen, and oxygen. The hydrogen gas was then burned to generate energy, a process that reconstituted the water molecules. According to Meyer, the device required less energy to perform electrolysis than the minimum energy requirement predicted or measured by conventional science. The mechanism of action was alleged to involve "Brown's gas", a mixture of oxyhydrogen with a ratio of 2:1, the same composition as liquid water; which would then be mixed with ambient air (nitrogen, oxygen, carbon dioxide, carbon monoxide, methane, chlorofluorocarbons, free radicals/electrons, radiation, among others). If the device worked as specified, it would violate both the first and second laws of thermodynamics, allowing operation as a perpetual motion machine. Source: Wikipedia, the free encyclopedia

The water fuel cell is a technical design of a "perpetual motion machine" created by American Stanley Allen Meyer (August 24, 1940 – March 20, 1998). Meyer claimed that an automobile retrofitted with the device could use water as fuel instead of gasoline. Meyer's claims about his "Water Fuel Cell" and the car that it powered were found to be fraudulent by an Ohio court in 1996. The circuit[4]
Throughout his patents[4][5][6] Meyer used the terms "fuel cell" or "water fuel cell" to refer to the portion of his device in which electricity is passed through water to produce hydrogen and oxygen. Meyer's use of the term in this sense is contrary to its usual meaning in science and engineering, in which such cells are conventionally called "electrolytic cells".[7] Furthermore, the term "fuel cell" is usually reserved for cells that produce electricity from a chemical redox reaction,[8][9][10] whereas Meyer's fuel cell consumed electricity, as shown in his patents and in the circuit pictured on the right. Meyer describes in a 1990 patent the use of a "water fuel cell assembly" and portrays some images of his "fuel cell water capacitor". According to the patent, in this case, "... the term 'fuel cell' refers to a single unit of the invention comprising a water capacitor cell ... that produces the fuel gas in accordance with the method of the invention." 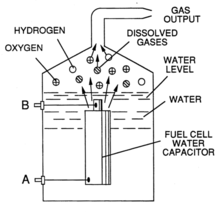 In a news report on an Ohio TV station, Meyer demonstrated a dune buggy he claimed was powered by his water fuel cell. He estimated that only 22 US gallons (83 liters) of water were required to travel from Los Angeles to New York.[11] Furthermore, Meyer claimed to have replaced the spark plugs with "injectors" that introduced a hydrogen/oxygen mixture into the engine cylinders. The water was subjected to an electrical resonance that dissociated it into its basic atomic make-up. The water fuel cell would split the water into hydrogen and oxygen gas, which would then be combusted back into water vapor in a conventional internal combustion engine to produce net energy.[3]

Philip Ball, writing in the academic journal Nature, characterized Meyer's claims as pseudoscience, noting that "It's not easy to establish how Meyer's car was meant to work, except that it involved a fuel cell that was able to split water using less energy than was released by recombination of the elements ... Crusaders against pseudoscience can rant and rave as much as they like, but in the end, they might as well accept that the myth of water as a fuel is never going to go away."[2]

To date, no peer-reviewed studies of Meyer's devices have been published in the scientific literature. An article in journal Nature described Meyer's claims as one more "water as fuel" myth.[2]

In 1996 Meyer was sued by two investors to whom he had sold dealerships, offering the right to do business in Water Fuel Cell technology. His car was due to be examined by the expert witness Michael Laughton, Professor of Electrical Engineering at Queen Mary, University of London and Fellow of the Royal Academy of Engineering. However, Meyer made what Professor Laughton considered a "lame excuse" on the days of examination and did not allow the test to proceed.[3]According to Meyer, the technology was patent pending and under investigation by the patent office, the Department of Energy and the military.[citation needed] His "water fuel cell" was later examined by three expert witnesses[who?] in court who found that there "was nothing revolutionary about the cell at all and that it was simply using conventional electrolysis." The court found Meyer had committed "gross and egregious fraud" and ordered him to repay the two investors their $25,000.[3]

Stanley Meyer died suddenly on March 20, 1998, after dining at a restaurant. His brother claimed that during a meeting with two Belgian investors in a restaurant, Meyer suddenly ran outside, saying "They poisoned me".[1] After an investigation, the Grove City police went with the Franklin County coroner report that ruled that Meyer, who had high blood pressure, died of a cerebral aneurysm.[1] Some of Meyer's supporters believe that he was assassinated to suppress his inventions.[1][2][12]

Meyer's patents have expired. His inventions are now in the public domain, available for all to use without restriction or royalty payment.[13] No engine or vehicle manufacturer has incorporated Meyer's work.[14][15]

Water-fuelled car
From Wikipedia, the free encyclopedia
(Redirected from the Water-fueled car)
A water-fuelled car is an automobile that hypothetically derives its energy directly from water. Water-fuelled cars have been the subject of numerous international patents, newspaper and popular science magazine articles, local television news coverage, and websites. The claims for these devices have been found to be pseudoscience and some were found to be tied to investment frauds.[1][2][3][4] These vehicles may be claimed to produce fuel from water on board with no other energy input or maybe a hybrid claiming to derive some of its energy from water in addition to a conventional source (such as gasoline).